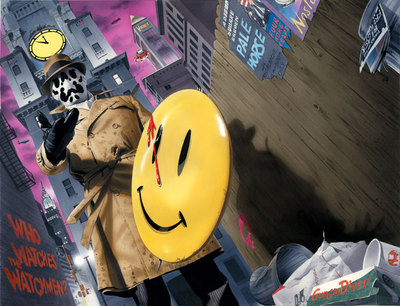 Two Hollywood trade magazines are reporting that the final casting choices for Zack Snyder’s Watchmen — a film directed by a guy I consider to be an overrated hack, based upon one of my favorite graphic novels — will be formally announced at this weekend’s comic con.

The rumors right now seem pretty solid, though. Jackie Earle Haley — who has an absolutely perfect look for the part — will play Rorscach, the psychopathic vigilante. Bill Crudup of Almost Famous will be Dr. Manhattan, Matthew Goode will be Ozymandias, and Patrick Wilson will star as the Nite Owl.

They all seem like solid casting choices, but I wouldn’t choose Zack Snyder to direct anything as deep and psychologically compelling as Watchmen. 300 was one of the most garish and politically repugnant films I’ve ever seen: it was easy to imagine it being greenlit on September 12th, 2001, and it comes across as the feverish wet dream of hate mongering anti-Muslims. In one section of the film, Leonidas’ wife (filling the role, I guess, of Laura Bush) is raped after trying to convince a Teddy Kennedy like anti-war figure to lend his voice to hers in the Senate to support the war. She then kills him on the floor of the Senate, simultaneously proving that he’s been taking bribes from the Persians and galvanizing the politicians to unilaterally going to war without the support of Ancient Greece’s version of the United Nations, the other city states. It’s absurd, and I say this as someone who largely supported going to Iraq (although I am filled with nothing but sadness and disgust when I see how badly that has been botched from a humanitarian and political perspective). When I went to see the film in theaters, my friend Stacey and I — very definitely on opposing ends of the political spectrum — spent 30 minutes after the show sitting in the theaters, united in our repulsion for the transparent politics of the film. And I was no big fan of Dawn of the Dead either, despite being an unabashed zombie fan.

The rumors on possible plot changes make the situation even more dire. Supposedly, Rorschach has been made softer and friendlier, and the ultimate plot twist — in which Rorschach, his comic book ethics exposed as completely irrelevant in a world of real-life, morally ambiguous decisions, is killed for the greater good — has been all but neutered.

Then again, I suppose I have no reason to be hopeful: no one has ever taken an Alan Moore comic and made a good movie out of it. From Hell, League of Extraordinary Gentlemen, V for Vendetta or Swamp Thing anyone?