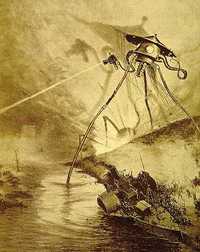 Last night, I was watching George Pal’s 1953 version of War of the Worlds. Like nearly everyone, I have always loved this film, and can remember the loathsome horror I felt when, at the age of five, I watched it with my father and I saw the sickly green hand of a martian for the first time.

But one thing that has bothered me more and more as an adult in the film is the way it abandons the Victorian setting. For me, as an adult, War of the Worlds isn’t about Martians invading Earth: it’s about Martians invading Victorian England. It’s about Tripods ripping steam locomotives off their tracks, melting Big Ben with their heat rays, filling the Thames with a vile red weed and obliterating a technologically unsophisticated human army.

It really does seem like a lost opportunity that when Hollywood chose to remake War of the Worlds, they set it in the modern era. I enjoyed Spielberg’s version, but the bottom line is that, by setting it in the modern era, you remove the quality that holds the most allure to the contemporary reader of the novel: the theme of extraterrestrial technology versus the clunky, brass-and-cogs technology of our recent past. That’s not what Wells was getting at, of course, but without it, War of the Worlds is just another invasion novel.

The reason why Hollywood refuses to set it in a past era is obvious: “It didn’t really happen that way.” But for me, that’s the point: it would be retro-future sci-fi at its finest. And I think the audience can grok that.