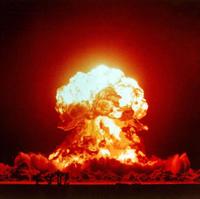 It’s worth a read, and everyone who was once a dorky teenage boy will feel the same old thrills as Wheaton recounts his first experience curling up in bed with a cheap post-nuclear apocalypse novel, or his first time watching Dawn of the Dead and seeing in a zombie apocalypse a world where he could become the shotgun-toting post-apocalyptic hero every kid secretly wants to be (and, in my case, hopes he someday will be even well into responsible adulthood).

But I think Wheaton’s best observation is less the nostalgic thrills he describes of reading and watching post-apoc sci-fi than why we are experiencing a popular resurgence in the genre. Wheaton writes:

So why is the revival in full swing now? I think it’s because a lot of the same fears and geopolitical conflicts that dominated the post-WWII era when apocalyptic fiction really got started are alive and well today. We don’t have the Cold War, but we have terrorism, global warming, and a government that does everything it can to keep us in a constant state of fear and uncertainty. When we feel like this, one way we cope is by creating worlds where the worst of our fear have been realized, worlds where we can walk away if it gets too scary, and maybe it prepares us to deal with that world, should we create it for real.

Without getting into party politics, I think this is dead-on, but I disagree with him about the fear being the same as in the post-WWII era. In the late 40’s and 50’s, there was a definite knowledge that the world had been pulled back from the brink of disaster. What arose during that time wasn’t post-apocalyptic sci-fi so much as dystopian science-fiction, which we’re not seeing as much of yet. Contemporary post-apocalyptic science-fiction, on the other hand, seems largely based on a fear of something besides our own governments: viruses or zombies or wars or catastrophic climate change.

But I think we’re due for a resurgence in dystopian sci-fi. People can’t stay in a high tension of fear forever, and people are gradually beginning to realize that their fears are ultimately benefiting power grabs by the government over actually averting catastrophe. When that shift changes, I expect we’ll start seeing a lot more dystopian movies and novels… in fact, that shift has already started with movies like V for Vendetta, a film impossible to imagine being made in the 90’s.

It’s The End Of The World As We Know It, And I Feel Fine [Suicide Girls]