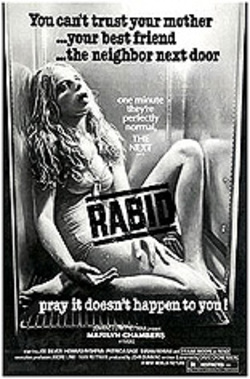 It may sound weird, but sometimes I miss the box.

You know what I’m talking about. That awkward, ugly, hard-to-open and hard-to-close contraption that held within it that equally ugly and awkward object known to historians of the moving image as…

The first video I remember renting – from one of New York City’s brand-new video rental establishments somewhere on upper Broadway – was David Cronenberg’s Rabid. This would have been at the tail end of 1983, and by the following May, when I returned to the suburbs of Virginia to spend the summer with my parents, video stores were suddenly all over the place. While it’s hard to imagine a suburban mall these days without its Blockbuster or equivalent, at the time the sudden existence of these stores was as close to a revolutionary event as one can get in the suburbs.

Back then, technology had not quite decided on Betamax or VHS as the format of choice, and my father – never a great reader of trends – had invested in a Betamax machine. I no longer remember exactly what the Betamax boxes looked and felt like, but I have a rough memory of them being even clunkier and uglier than the VHS ones.

Ugly as they were, though, video boxes soon acquired a world of positive associations for me.

It’s hard for younger folk today to understand how different entering movie time became with the advent of the video. For the first time ever, one could travel to a specific scene and linger over the events that took place in it, like a detective at the scene of a crime. Again and again one could watch Jon Voight climb out of the gorge at the bottom of the falls in Deliverance; watch the birds attack the children of Bodega Bay after Tippi Hedren and Susan Pleshette had dismissed them in The Birds; watch Norman Bates’ pensive expression turn, just ever so slightly, into a smile as the last of Janet Leigh’s sedan disappeared into the bog behind the Bates Motel in Psycho. It was all there, available for real perusal, for the first time ever.

The first films I rented that initial summer of the video were, of course, horror films. I had to see all the fondly remembered films of my childhood again, but I soon started venturing out into new territory as well. The presence of an entire horror section in our video store at first encouraged the idea that the world was full of great horror films I’d never seen.

This – as many others besides myself discovered – wasn’t quite the case. What the world turned out to be full of was crummy horror films, with a couple of good ones thrown in. But there were good ones enough. With the advent of the box (both the smaller one with the lid that pried off on top and the larger, squishier one that opened at the middle), I could now go back to the films that had formed so much of my imaginative life and discover that they were both more, and less, than I’d originally thought they were. Some scenes, watched again and again, lost their original terror and mystery. Some others, however, only got MORE mysterious the more you watched them. Those, I discovered, were the real masterpieces. The films that no amount of rewinding could ever deprive of their uncanny charge.

Some films, of course, can still only be seen in clunky box format. As I wait, for example, for the original (1971) Willard to finally make it to DVD, I continue to consult my big, ugly (and increasingly erratic) VHS version that I purchased years ago for a dollar from a video store that was going out of business.

On the day when Willard finally does make it to DVD, I’ll be faced with the possibility of chucking my VHS version. But I probably won’t. Ugly, utilitarian, petrochemical piece of junk that it will be at that point, it will all the same simply be too saturated in nostalgia.

The ugly box, it turns out, has a beauty of its own.