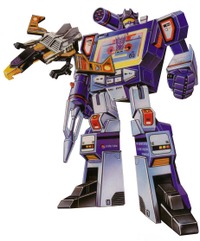 USA Today has posted up a poll for fans to vote on the latest robot to be plucked from the 80’s cartoon, over-designed so it looks nothing like the original and thrust up on the screen for Transformers 2.

The producers swear they care, but honestly, the contest’s over before it started: the possible choices are Devastator, Jetfire, Soundwave, The Insecticons, Grimlok, Ravage, Mirage, Shockwave, Ultra Magnus and Hot Rod.

Soundwave’s going to win in a landslide. After all, who’s going to pick Ultra Magnus… the lame doppelganger of Optimus Prime who proved to be such a wuss in the animated Transformers movie that he passed over leadership to the utterly incompetent Hot Rod? The Insecticons and the Dinobots are cool, but Soundwave is just going to be the clean winner here: no other Transformer has that amount of cult following.

The problem is, of course, that what made Soundwave so cool is precisely what caused him to be dropped from the first film: Soundwave is a 200 foot robot who transforms into a tape deck. And that’s what fans want. But Michael Bay has been adamant that the transformations in the films have to be to the right scale. Which gives us an over-articulated, two-foot tall Soundwave transforming into a portable CD player. Great.