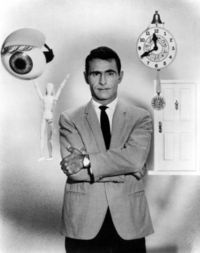 Over at Locus Online, Gary Westfahl has written a poignant essay on the enduring power of The Twilight Zone.

Why is it, Westfahl asks, that a television show with such meagre production values, such remedial special effects, such low-grade talent and such often silly plots has managed to endure, even when updated versions of the same show and a feature film have flopped?

Westfahl argues that it’s an issue of classical tragedy. The Twilight Zone is tragic in a way few other sci-fi shows are. He cites one of my favorite episodes, The Invaders, in which the house of an old woman is invaded by a tiny spaceship. Destroying it, a tiny human astronaut crawls out of the wreckage and radios home, screaming about an attack by giant aliens before he dies.

This episode is not classically tragic, but as Westfahl points out, “Since we never get to know these astronauts, their deaths are simply sad, lacking the emotional impact of the death of a tragic hero, and the old woman, in destroying the beings that were threatening her, has apparently achieved a happy ending. Yet the circumstances of her lonely life are sordid and unpleasant, and the removal of those annoying invaders will clearly do nothing to improve the miserable routine of her daily existence.”

And that’s an excellent point: The Twilight Zone is sordid, metaphysical and morbid. It is a show primarily about unhappiness and human failure and in attempts to update it, producers have largely missed the plot. Ultimately, they only see it as sci-fi, and not as the commentary on the often sordid side of human experience that it is.