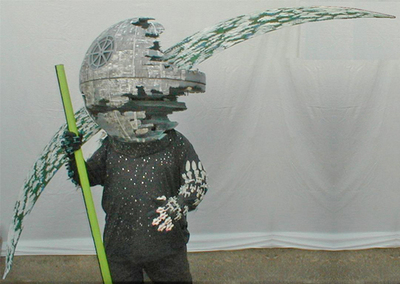 Of all science-fiction fans, I believe it is the pudgy Dave Smith, wobbling wildly under the weight of his improbably themed costumes, for whom I have the most fondness.

We’ve all seen cosplay pictures from sci-fi cons. And while a lot of creativity goes into some people’s costumes, for the most part, all you ever see is an endless cavalcade of morbidly obese Jedis and mousy, pale but still-kind-of hot girls standing trembling in the corner in their ill-fitting Slave Leia outfits.

The Death Star costume is definitely my favorite, as is Dave’s delightful plot to retire the costume: he wants to wear it at a show where he can ride a bike down a long ramp into the lake. At the highest point of his jump, the Death Star will then explode as he detaches from it and escapes into the water. I have no idea how he intends on doing this: possibly by lighting a firecracker with his teeth. But I want to be there when he does.