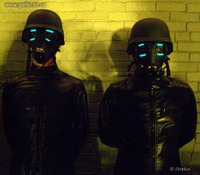 Speaking of Star Trek, sci-fi fans have long laughed at the central conceit of the show: that you’ve got an entire spaceship full of crewmen, but on every single dangerous mission, they decide to beam down the entire chain of command… and, of course, a single red shirt ensign, presumably as a lamb to the slaughter.

Popular science fiction is rife with this sort of anti-military logic. From a practical story telling perspective, it makes sense: how do you get your heroes in danger week after week if they’re smart enough to play it safe? In science fiction, idiocy is generally the key to action and adventure.

The Fantasy and Sci-Fi Lovin’ Blog has a great entry up, examining the often idiotic depiction of the military in popular and classic science-fiction. Naturally, there’s a lot of stuff left out — pretty much all science-fiction depicts space exploration as being primarily done by the military — but it brings up a point I’d never really considered before: why is the depiction of the military in sci-fi so vague in its delineation between ranks and jobs? None too surprisingly, by this criteria, Battlestar Galactica is at the top of the heap of military sci-fi… and, I think, a lot more compelling for it.