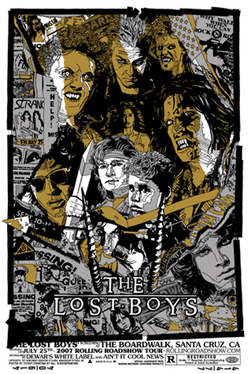 Nobody’s declaring it a national holiday for The Lost Boys, but fans should definitely celebrate the 20th anniversary. Prior to its July 31, 1987 opening, The Lost Boys had been touted as a sleeper hit; but this movie surprised everyone. It was the first modern vampire movie to hit it big with audiences and its success paved the way for the likes of Buffy the Vampire Slayer and even Bram Stoker’s Dracula. It also introduced the one-two acting powerhouse that was the Coreys and was the first Joel Schumacher movie not to suck (apologies to all you D.C. Cab fans out there).

What’s impressive about Lost Boys is that it’s one of the few 80s movies that – despite many dated elements (the clothes, the music, the hairstyles, Jami Gertz) – still holds up today.  This is probably owed to the funny script by the late Jeffrey Boam, which respectfully played with many of the vampire conventions (Van Helsing has become Corey Feldman) while staying true to vampire lore.  And it must be said, Schumacher’s direction also helped: the movie is slick and polished, but not over stylized, unlike many of his later efforts (coughcoughBatmanandRobincoughcough).

DVD Lost Boys 2 is finally on its way, without the Coreys (which may bring some of you to tears) and we wish them luck; the original will be tough to top.