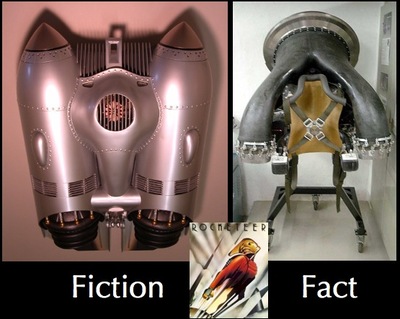 Fiction: The ubiquitous sci-fi jetpack. Pictured here, the jetpack of the Rocketeer. Strapped to his back and filled with explosive rocket fuel, the Rocketeer’s bronze, flame-belching jetpack allowed him to sub-sonically hurdle over the skyline of 1938 Los Angeles, fighting Nazis and seducing Betty Page. It is small, functional and aesthetically pleasing to the eye.

Fact: Resembling a cast-iron uterus with whirring, razor-sharp dentata more than a jetpack proper, Andreas Petzoldt has spent the last decade perfecting every rocket lad’s dream on his own dime. It’s a monstrous thing, weighing over 120 kilograms. It’s what H.G. Wells might have envisioned the Kaiser’s army using to invade England. It’s a jet engine strapped to a fragile, easily crushed human torso. And the reality of the thing is that if this contraption fails in its test flight, the pilot will find himself hurtling to the ground at 32 feet per second per second, strapped to over 200 pounds of highly-explosive rocket fuel and whirring metal blades.

Fact vs. Fiction in Sci-Fi Fashion may very well become a recurring rubric. Got an idea for a future entry in this series? Leave us a comment.