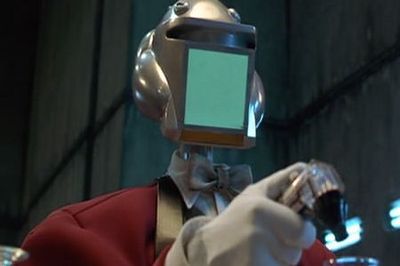 Double Viking has posted up what can only be described as a graphomaniacal thesis on the supposed excellence of Luc Besson’s The Fifth Element. What’s so fantastic about it is that if I simply changed the title, I could easily repost it as the definitive compendium of the qualities of the film that make me feel like my teeth are being drilled.

In fact, it’s so literally like that that I’m having a hard time arguing with it. All I can do is read each point over and retort, “Yeah… that’s why the film is terrible.” The Fifth Element is a poorly written, poorly structured, tangerine-bright piece of overrated sci-fi trash. I like Luc Besson generally, but it’s clear from watching it that Luc Besson was telling the truth: this really was a movie he wrote when he was five years old.

When a list talks about how an undeniable element of excellence in a film is Chris Tucker prancing around in leopard skin, sporting a platinum-blond afro and hyperactively screaming through a good portion of the run time, I just don’t know what to say: Chris Tucker’s performance in this film makes me feel like I’ve had a glass catheter shattered inside me. It’s just madness. And when a writer follows that up with the claim that the film is expertly scripted because the hero and protagonist never, ever meet? I mean, whuh?

Is there anyone out there who appreciates The Fifth Element, short of its sole redeeming feature: several reels worth of Milla Jovovich nudity? I suppose there’s a contingent of “So bad its good!” fans out there, which I find inexplicable, but okay… but are there people who actually appreciate it on its own merits? And, if so, are you mad?

Edit: I do like the robot bartender. I really need to have one of those babies installed.