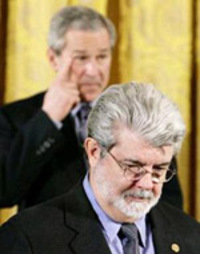 Over at the erudite, sophisticated and helpfully critical Who Sucks blog, an exhaustive list of 9 reasons why George Lucas rocks has been posted, covering all facets of his objective excellence: from his genius in script writing, to his fine casting choices, and praise for such brave decisions as the introduction of Jar Jar Binks and his fearless decision to make Greedo shoot first.

No, we’re just kidding. Perhaps appropriately, the list is all about why George Lucas colloquially sucks.

Look, we’re not going to fool around here: it’s a juvenile list. But it’s hard to read it and not admit that almost every item is dead-on. Greedo shooting first was a loogie hawked contemptuously in fans’ eyes, as was Jar Jar Binks, or Hayden Christensen replacing Anakin Skywalker in Return of the Jedi. Midichlorians is not on the list, but it certainly should be. Additionally, Lucas’ writing skills are a joke, and you can only sit agog when you hear anecdotes of his directing methods. Kubrick this guy isn’t.

But that all said, Lucas needs credit for creating a vibrant universe in which so many other authors and artists have flourished. At this point, I don’t even consider Star Wars synonymous with Lucas: the films are just the starting point for the rich tapestry of the Expanded Universe.