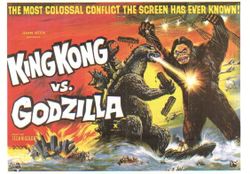 Goatling supreme, Court has chimed in on this week’s Do’s and Don’ts Vs. theme with this entry:

How about King Kong vs. Godzilla?  I’m not sure if that even counts as horror–more like…a sad attempt at it.  But surely a meeting of these two epic behemoths should look cooler than this. Though it’s interesting to see this older-style artwork, this is just hilarious!  Godzilla clutches what looks like a train in his fist while Kong holds power lines up over his head (wouldn’t he be electrocuted, standing in all that water?).  And Tokyo burns!  Again!  Look at all the poor little people, fleeing in their tiny boats–sorry folks, you don’t have a prayer. Or at least, you wouldn’t, if the monsters didn’t look like cuddly cartoon characters.  I think this poster is a "Don’t." –Court 🙂

Thanks for writing us at monsterfestpics@gmail.com, Court.  Take the leap to see how we feel about your choice.

In your favor, Court, it does seem like they’re fighting the city and not each other, though what those subway cars are doing way out in the ocean is beyond me.  I reckon he could have carried them all the way from the city, but it’s pretty far away.

But…the gorilla whale is blowing a big searing patch right into Sasquatch’s belly there, and Apeface does look like he’s ready to go strangle-crazy with those power lines, so they really are going at each other, so maybe that qualifies as a "Do,"

But…Konger is sort of not quite looking at Godzilla.  His eyes are sort of focusing in front of him and not at..anything, really, and then there are those jet fighters.  Perhaps, the argument can be made that the King of Monsters is, in fact, blowing up an airplane that has gotten too close to his simian friend, and, in fact they are teaming up!

Todd’s verdict!  It’s a Don’t, baby!  We want the monsters to fight each other, not the army or the architecture!  Thanks, Court!