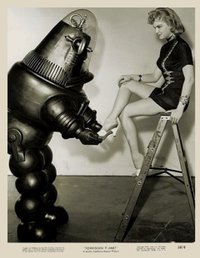 They just don’t make robots like they used to. Look at the newest Transformers film: each robot is a thorny mess of rotating servos, clanking gears, exhaling fins and exposed wires.

Whatever happened to the days of simpler robots, portrayed by men in cardboard suits, spray painted silver and making muffled *beep beep* noises with their mouths? Fine American robots of classic sci-fi gone by, like Robbie from Forbidden Planet, Maria from Metropolis, Gort from The Day The Earth Stoodt Still, and so on?

Those robots had goofy class, tin-can charm, all lost with the move to the hyper-defined robots of CGI. Bizarrely, though, CGI has made robot designs even less practical and realistic than they were before: if a humanoid robot is ever invented, it’s much more likely to be a simple walking soup can of the Robbie variety than a twenty story tall, towering Megatron with a million points of articulation.

Over at the Anonymous Philanthropist, there’s a huge (and utterly gorgeous) gallery of classic and modern robots. You could easily build a fantastic blog out of such a site, using it as your primary reference: A Robot A Day would be sure to be successful.