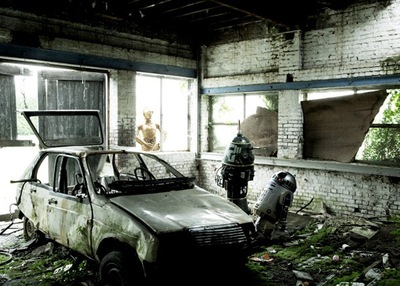 Star Wars’ famous opener — "A long time ago, in a galaxy far, far away…" — is both a blessing and a curse. A blessing because it excludes the Star Wars universe from infringing upon our own: we’ll never see an official Star Wars product where Luke and Leia go to Earth to learn the lost secrets of the Force from some filthy hippies, for example, or a political cartoon where Emperor Palpantine sends his newest apprentice — Darth Dubya — to Washington to overthrow the American senate. And we’re better off for it. But the curse is that as stupid as any of that stuff would be, it would sure be goofy fun.

What prompted this musing of mine was a series of excellent shots by French photographer Cedric Delsaux, who won this year’s Bourse du Talent competition with a striking series of photographs of Star Wars characters in the Parisian streets. The vast majority of the shots are artful, but they really do make me pine for a Lucas approved mash-up of Star Wars and the real world. Perhaps as an Elseworld style take on the mythos, branching the world of Jedis in non-canonical directions under an official umbrella. Oh, sure, it would be stupid, but deliciously so. I can see it now: Star Wars Vs. The Nazis!