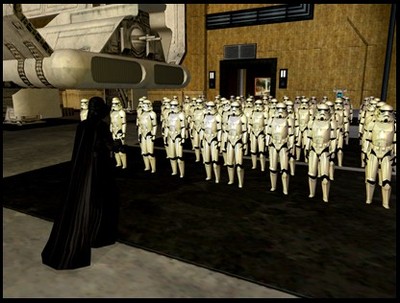 One of the cool things about creating a massively-multiplayer role-playing game (MMORPG) that is technically a dud but feeds the secret itch of a number of obsessive dorks is you can actually play around with the monster bashing formula bit and introduce some new concepts.

Star Wars: Galaxies — the oft-troubled MMORPG based upon the Star Wars universe — has done just that: they’ve created what they call a “Galactic Senate” of players to convene, discuss issues in the game-world and promote certain agendas to the developers.

Some people are crowing this as the first step to a truly democratic MMORPG experience, but others are more skeptical: while all members of the Senate were nominated by players, they were selected by the developers.

Ultimately, what it comes down to is an illusion of control (hey, just like the real Galactic Senate!). By creating a puppet organization with no real power, the devs look like they are actually listening to players, but the senators have no real leeway to actually make devs act upon their motions. Boy, virtual politics seem eerily familiar, don’t they?