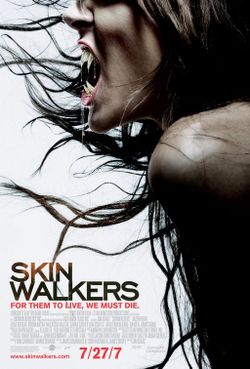 Kind of a cool big-city public transportation phenomenon is being immersed in the advertising campaign for a movie or, equally as often, an after-dinner cordial or deodorant stick.

We care about movies, though.

For about a month, as the subway rocketed through the underwater tunnels, the lights would flicker, and you would see that mascara-smeared Elisha Cuthbert fence-grab poster for Captivity blinking at you.  It was kind of cool, and kind of scary, and you felt as trapped as she was.

They all got replaced by these Skinwalkers posters yesterday.  Same studio!  Bigger thrills!  Did Cuthbert escape?  We’ll never know.  I checked out the preview for this one, and you can too: Skinwalkers Site.

It sort of looks like Near Dark meets The Howling meets the Omen-in-reverse meets the Gangrel clanbook.  God help you if you get that last reference.  None of that is a bad thing, though, it looks pretty cool, and it kind of sneaked up on us. More like sneaker walkers!  I don’t get my own jokes half of the time!

The preview’s voice over sounded like the cousin of the guy who usually does them.  I’ll try to snap a pic of the subway car for you, and we’ll keep our eyes peeled for news on this one.  It should be a pretty good ride.

That’s how you wrap up a post, baby!  You start with a story about a subway, talk about a movie, and you end with the line, "It should be a pretty good ride!"  A free lesson in blogging, goatlings!