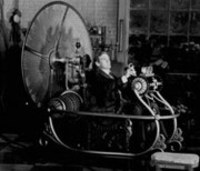 Over at Discover Magazine, the improbably named Bruno Maddox has written a fantastic and doubtlessly contentious article on the obsolescence of science fiction as a delivery system for big, world-changing ideas.

It’s the kind of article that you can love while passionately disagreeing with his points: there’s just many fine moments, from his description of a catfight between Jules Verne and H.G. Wells, to the swift evisceration of Michael Crichton. But broadly, the idea is this: science fiction is meaningless because there have been no real sci-fi classics in the last decade. Ergo, this proves that the future is charging ahead at such a breakneck pace that fiction can’t keep up with imagining realities that science can not conquer.

It’s a disingenuous argument: a decade lull in earth-shaking sci-fi ideas equals the death of a genre. Many of the classics that Maddox cites took their time to establish themselves on the minds of men. Anyway, science-fiction is only outpaced by science in the microcosm: big problems like time travel, FTL travel, terraforming, etc. aren’t any closer to being conquered now than they were a hundred years ago.

Plus, I don’t think it’s true that science-fiction has stopped putting forward large ideas, but the boundaries of the genre are more nebulous than before. Sci-fi isn’t dead, it’s just mainstream, and consequently, a lot of people who love sci-fi don’t realize they are reading or watching it at all.