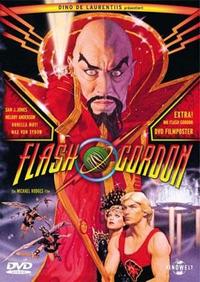 Flash Gordon fans, don’t expect Ming the Merciless — the evil emperor of Mongo, part Fu Manchu and part Gengis Khan — in the Sci Fi Channel’s modern take on the franchise. The PC Police have opted instead to replace him with Just-Plain Ming, a blond white guy played by John Ralston (best known as the Dad in Life With Derek.)

According to Mark Stern, Executive Vice President of the Sci Fi Channel, the decision was made to sidestep Ming’s Asiatic stereotype: “Ming was consciously or not an Asian dictator in that really kind of cliché, ridiculous way. We really wanted to go with someone who was actually very charming [and] blonde [sic] and stay away from what you would think of as this kind of [bald], thin, one-dimensional dictator.”

Incredibly, he then continued: “Having said that, it’s not like now our villains are Arabs… it’s really about finding the metaphor, because that’s what science fiction is about. It’s really not about being literal with it. It’s about finding what the allegory is and how to find something that feels like it’s dealing with things that we’re grappling with today, but not literally.”

So let me see if I’ve got this straight: if it fit the metaphor, evil Arabs in space would be an acceptable racial stereotype for a Sci Fi show, but not Asians? Good one, Markie.

People, please. Being sensitive to other people’s feelings is fine, and there’s no doubt about it: by modern standards, the original Flash Gordon comes across as a bit insensitive. But you can update the tone of Flash Gordon while staying true to the visual aesthetic. When we look at a character like Ming the Merciless and decry him as a stereotype merely because he’s both evil and Asiatic looking, we are bringing our own baggage to the table. We need to stop it.