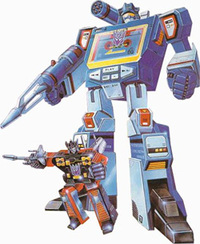 Cracked.com — once the official web portal of Mad Magazine’s lamest rip-off publication, now re-envisioned as a Something Awful style internet humor portal, with results wildly oscillating between hilarious and terrible — has posted a list of the 7 Most Useless Transformers to celebrate the premiere of the most recent movie.

Igniting into full on righteous 80’s nerd mode, I’m not sure I can agree with any list of overrated Transformers that starts off with Soundwave, generally considered the coolest Decepticon of them all, with his electro-reverberated voice, tape deck full of transforming minions and murderous heart. Of course, Soundwave’s transformed disguise is worthless: a two-story tall bright purple cassette player is bound to attract suspicion.

But what about Repugnus? He was a “Monsterbot” that transformed into a gigantic robot praying mantis. How did he get on the list? It’s hard to imagine how any Transformer could be any cooler than a giant robot monster insect, short of it transforming into Decepticon Cthulhu.

The 7 Most Useless Transformers Ever [Cracked]