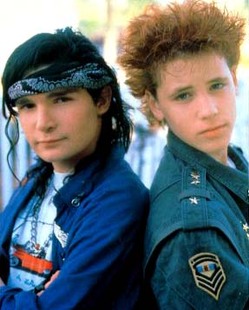 I’m starting to notice a new trend in horror films these days and it’s one that I’m not sure I like.  Seems like there are a lot of new horror films either in production or coming soon that aspire to be like horror films of the 1980s.  Almost every time I read about a new horror film in production, there’s some quote about how the director is trying to make a homage to ’80s horror, which usually means making their movies really really gory.  I’m not going to mention or attack any of these films by name simply because I haven’t seen any of them yet, but everything that I’m hearing makes it all sound like the filmmaker’s definition of "homage" is my definition of "uninspired rip-off".  Guys, I hate to break it to you, but a lot of ’80s horror sucked.

Of course, the ’80s were a great time for horror movies.  Lots of classics, to be sure: The Fly, Aliens, Re-Animator, The Howling, Poltergeist, The Shining, Videodrome, Hellraiser, The Thing, Evil Dead 1 & 2, and A Nightmare on Elm Street.  But for every one of those great films, there were about ten awful movies, like The Mutilator, Phantom of the Mall, Sleepaway Camp, Slumber Party Massacre, Burial Ground, and on and on. There were crappy sequels (like most of the Friday the 13th films) and remakes and things got worse as the decade wore on.  Can you name one true American horror classic from 1989?  You’ve got to think hard about that one, don’t you?  Yes, a lot of these movies were great fun to watch growing up, but most of them blew, plain and simple.

My problem when I hear the word "homage" is that it says to me that someone just wants to replicate their favorite movies, which is nothing new and pretty much what filmmaking is all about when you think of it.  But the great genre movies of the 80s were original, innovative, unique, creative, or all of the above.  Even some of the remakes, like The Fly and The Thing, were distinctive and groundbreaking in a lot of ways, and not just in terms of FX.  The classics were often the exception to the rule, and some of them weren’t properly appreciated in their time, in part because there were so many lousy horror films that audiences began to have a bias against them.

Hey, I loved a lot of those movies, too, but the classics eventually stand out from the crowd while the rest of them just fade into movie oblivion.  Just because you had a great time watching New Year’s Evil with your buddies doesn’t mean it’s a good movie, so don’t confuse the two.  As for those true classics, how many variations of Aliens or Freddy Krueger wannabes have we seen throughout the years?  Can’t we just leave the 80s (and the 70s, while we’re at it) alone and focus on today?  There’s a lot of evil in the world right now that goes unexplained and unexplored by genre filmmakers;the pickings are ripe.  The ’80s are history, folks, so let’s focus on the right now and make tomorrow’s classics today.