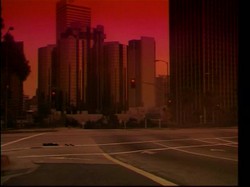 There are plenty of ways to make people gasp or scream in a horror movie.  You can have a corpse open its eyes, or a cat jump across the screen or a fist punch its way out of a grave, but I like the moments that sort of scare an audience into a worried, desperate silence.

Nothing seems to do that more than putting the main character in an empty city.  It should be teaming with pigeons and people and people feeding pigeons and cars and hot dog vendors and ice cream trucks and pigeons, but there is nothing.  The traffic lights still blink, and in Night of the Comet, the radio DJ’s backup tapes keep playing, but where we expect something there is nothing.  And that makes us quiet.  Like we’re visiting a grave.  Which we are.

The best example of this in literature (that I know, anyway) is Ray Bradbury’s "There Will Come Soft Rains" but we’re talking about movies, and the examples come mostly from zombie flicks (I’ll leave out Vanilla Sky‘s Times Square Tom Cruise jog).  The Empty Miami of Day of the Dead is a magnificent dead city with desolate beaches and empty roads, and so is Vacant London in 28 Days Later as sharp-boned Cillian Murphy picks his way through abandoned chip shops and tube stations while grim-headlined pages from the Fleet Street Beastlies drift by.  Not a bobby in site.

For my mind, though, the weird neon skies of Night of the Comet (mentioned above!) and the total, to me, unfamiliarity of a California city was the real quiet-maker.  You watch and you kind of open your senses searching for a familiar landmark or hoping you’ll hear some kind of Survival Noise, but there is only strange color, dust and nothing but nothing.

You know the New York of I Am Legend is going to shut some folks up.  I expect total reverent silence.  Until the vampires.