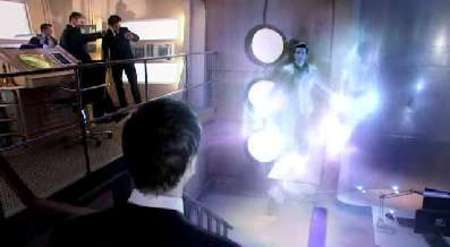 All over the Internet, fans reacted with collective force to the season 3 finale of Doctor Who: by heaving their bowels and grimacing until the ocular blood vessels exploded, turning their eyes into little hemoglobin and vitreous jelly supernovas.

It was, without a doubt, a terrible episode. Spoilers ahead, naturally.

At this point, there’s little point in calling much attention to John Simm’s portrayal of The Master. In short, Russel T. Davies is content to portray the Master as a prancing, squealing imbecile and there’s not a lot we can do about it.

But it’s hard to imagine what Davies was thinking when he came up with some of the ancillary details of the episode. You might remember that in “The Sound of Drums,” the Doctor was prematurely aged about 100 years. Given the immortal, ageless nature of Time Lords, that in itself should have been enough to make you roll your eyes… not one of those passive pupil orbits like you give your mother when she pulls out the baby pictures, but the kind with enough force that your head, for a brief moment, seems likely to be wrenched off of your spurting neck stump.

But Davies wanted a less subdued reaction. So in “The Last of the Time Lords,” Davies has the Master age the Doctor again… this time into a one-foot tall Gollum-like octogenarian he keeps in a cage.

Not stupid enough for you? Don’t worry: Davies has one more trick up his sleeves. At the end of the episode, the remnants of the planet Earth all massively collect to chant The Doctor’s Name, which revitalizes him and allows him to turn back time so nothing happened in the first place. There’s a reason Star Trek was decried for the deus ex reboot.

If that ending seems familiar, it should. It’s what happens in J.M. Barrie’s Peter Pan when Tinkerbell dies. If everyone who believes in fairies claps their hands, the Doctor can be saved and the genocide just never happened!

Oh, also? Captain Jack Harkness lives eighty billion years and eventually becomes the decapitated hydrocephalic head with dreadlocks known as the Face of Boe. That’s why the Face of Boe knew about the Master… of course, why he decided to relate it to the Doctor in the form of a completely meaningless anagram is another issue entirely.

Rumor has it Davies is leaving Doctor Who at the end of the fourth season. Good riddance.