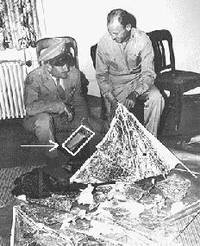 This weekend, over 50,000 people are expected to flood the city of Roswell, Mexico. Lunatics and illuminati alike will celebrate the 60th anniversary of, well, something crash landing there on July 8th, 1947.

It all started when the Roswell Army Air Field issued a press release stating that they had recovered a crashed "flying disc" from a ranch near the town. Later that afternoon, the Army clarified that it was a crashed weather balloon and promptly proceeded to show the press pieces of wreckage from the crash. For the next thirty years, that’s essentially all that anyone thought happened. But in the 1970’s, Roswell again became the Mecca of ufology when a series of books and television specials dredged up the report and started claiming cover-up.

Since then, even a number of prominent UFO researchers have admitted they don’t think anything went down. But that hasn’t stopped Roswell from raking in the tourism bucks appealing to the Mulder types who want to believe.

If you’re in the New Mexico area this weekend, you might drop by Roswell. With so many wonderfully eccentric freaks running around, waving plastic aliens and wearing day-glo antenna headbands, its sure to be a fun time.