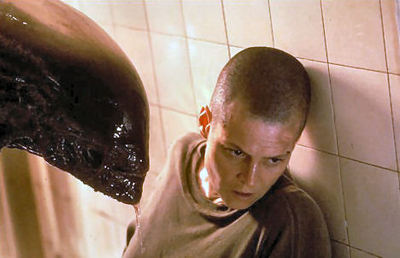 Amongst fans of the Alien series, Alien 3 has always gotten a bad rap. And I’m really sick of you jerks.

Alien 3 is not a frantically paced film. After Aliens, in fact, it is a let down. If James Cameron’s Aliens was a hose of helium inserted as a catheter, inflating the viewer and sending him bobbing about the ceiling, Alien 3 is the rusty shiv that punctures the gall bladder and deflates.

But it’s meant to be. Like Fincher’s other work, Alien 3 isn’t meant to be action packed: it’s meant to be a psychological horror tale, and nothing could really be more chilling than Ripley alone, impregnated with a queen larva, without weapons, isolated on a planet full of murderers and rapists, and up against a Xenomorph. Alien 3 is a taut, claustrophobic, psychologically vertiginous little film which, unfortunately, has the bad luck of being the lesser film in a trilogy of masterpieces.

The problem with Alien 3 is not that it’s a bad film: it’s directed by David Fincher, who would go on to direct Seven and Fight Club. It’s not with the actors, who are excellent across the board. The writing is spot-on… it’s hard to think of a more horrifying scene in the whole Alien series than when Ripley forces herself to observe Newt’s autopsy to make sure she hadn’t been impregnated with an alien egg. And the finale is top notch. The problem with Alien 3 is that everyone in the audience wanted it to be Aliens 2, but there was no way it could have been.

One of the proofs that Alien fans use to indicate how much better Alien 3 could have been is by pointing to an early script by sci-fi luminary William Gibson which did indeed feature Hicks, Newt and Ripley fighting Xenomorphs on a space station above Earth. Surely that was the direction should have taken the series in.

I’d agree, in the abstract. Unfortunately, what no one ever tells you is that the script was terrible. Let’s put it this way: in that script, you can become infected with an alien by breathing in a biochemical mist, which causes you to rip off all your skin and become a Xenomorph. And Ripley? She’s barely in it. Also, as I recall, Hicks and Newt get it on.

Fox Studios seems to have ultimately decided against a strategy of constant escalation (from the single alien of the first film to the hive of the second, followed in the third film by Xenomorphs on Earth). And I think that decision was correct: look at Alien 4 or Aliens vs. Predator and tell me Alien 3 is the worst of the bunch. These films have far more in common with Aliens than the first or third movies and, to my mind, it’s pretty obvious they are lesser films, mimicking the frantic action of Aliens without also capturing the satire, psychology, characterization or wit.

People should give Alien 3 another chance in light of these films’ mediocrity: it’s obvious at this point that there’s a lot more to a good Alien film than just a room full of monsters and some tough space marines.