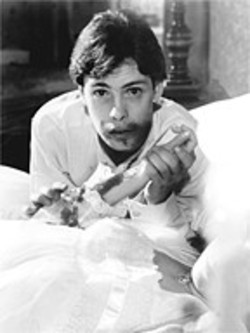 Which is scarier, the city or the country?

A good argument could be made for either, but to my mind there’s no question that if one is seeking not only fear but depression as well, then the city and the country both take a back seat to the suburbs.

I grew up in the suburbs, so I’d know they’re depressing even if I’d never seen a single horror film. Of course, I also look back with nostalgia on my suburban childhood, and horror movies back up that feeling of affection as well. There are horror movies that drive home the one-house-after-another bleakness of the suburbs, and there are others that bring to mind their quirky, lovable qualities – in particular, their way of inspiring community in the disaffected teenagers who grow up in them.

Interestingly, my vote for single most depressing horror movie featuring the suburbs is the same movie that, just a few posts back, Todd was celebrating for – of all things – its uplifting quality. That movie is George Romero’s 1977 stab at the vampire genre, Martin. I’m a little older than Todd, and had the opportunity to see this film when it first came out, back in 1977. I was 15 at the time, and didn’t have too many more friends than John Amplas’s socially challenged, hypodermic-carrying title character did. I had just acquired my driver’s license when I discovered that a new movie by the director of Night of the Living Dead was playing in Washington DC, just across the Potomac River from the prototypical suburb of McLean, where I lived.  In fact, if memory serves correctly, Martin was the first movie that I ever drove myself to see (alone of course).

I liked Martin, but it so effectively drove home everything ugly and unnatural and isolated about my suburban world and my place in it that by the time it was over I was ready to drive into the Potomac rather than back over it.

A viewing of Martin today can still bring me down pretty effectively. Why is Martin so depressing? Donald Rubinstein’s numbing, ABC-After-School-Special-on-Acid score for one. If there’s a more depressing film score out there, I’ve never heard it. Martin was filmed in the Crumbling mill town of Braddock, Pennsylvania, and while a lot of the scenery is semi-urban, a number of crucial scenes take place in classic ‘70s suburbia.

Most notable of these is the one in which Martin terrorizes an adulterous couple in a rambling, state-of-the-70’s piece of modernist architecture such as many an affluent suburban block possessed back then. Everything in this house – from the brown wall-to-wall shag carpeting to the checkered wallpaper to the Reader’s Digest Condensed Books on the wall — has a brutal authenticity to it: one that self-conscious, too-pretty-to-be-believable ‘70s imitation films like The Ice Storm could only dream of achieving. Vampirism has always been an ugly business, but until Romero took his camera to the suburbs of 1970’s Pittsburgh, that ugliness had a certain beauty and mystery attached to it as well. With Martin, Romero drained vampirism of the last dregs of its native animal magnetism, and left viewers like me feeling as empty inside as Martin’s victims did.

Horror films with a positive image of the suburbs? Poltergeist and A Nightmare on Elm Street. Though both films take stabs at the suburbs’ negative qualities, their underlying message is that human connection – even if only among disaffected kids and teenagers — can take place there all the same.