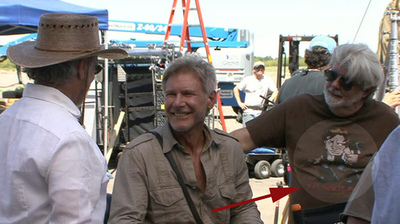 Please take good note of the too-tight t-shirt stretched across George Lucas’ flabby torso.The shot was taken on location at the Indiana Jones 4 set. If you squint (or click to enlarge) you can make out what the shirt reads: “Han Shoots First.”

You know, considering this is the man who incompetently changed the scene and stubbornly insisted that it was his original vision, this is a pretty big slap in the face to purists outraged by the character destroying change in the infamous Cantina shootout.

I’m staring to come around to the opinion that George Lucas’ changes to the original films are simply cynical cash-ins. When you look at the insane history of Star Wars DVD releases (many of which were marketed as “the definitive version” only to be quickly re-released with additional changes) and the recent release of the original versions, it simply seems like the endless regurgitation of the same content with minor changes, made to constantly get people to repurchase the same product.

I know Lucas probably thinks the shirt is oh-so-clever and ironic, but really, it just makes him look shameless: either stand by your stupid decisions or don’t. But don’t change your mind about them and then tell me I owe you another 40 bucks for you to correct your screw-up.