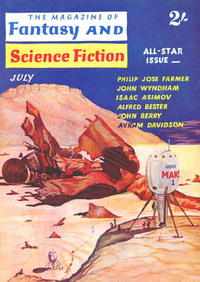 I have to give credit to the Magazine of Fantasy and Science Fiction: while they’re not quite embracing the web, they are making the first faltering steps in trying.

A few weeks ago, I criticized them for not going far enough in putting up past stories online for the public. It made perfect sense to me: F&SF has a huge library of stories which they can largely republish as they wish, and the largest online repository of free fantasy and science-fiction would certainly pull in a lot more money than those stories sitting out of print, in limbo. That said, you can’t expect a sudden change of species from traditional publishers, and I appreciated the first brave floppings of F&SF as it tried to lose its gills and evolve into a beast of Web 2.0.

Similarly, I love their new promotion: if you’re a blogger and are willing to write a short post about the September 2007 issue of Fantasy and Science Fiction, the magazine wants to send you a free copy. Just send them your address, promise to write about it when you get the issue and then, when you do, throw up a post… even if that post is, “Jeez, this magazine sucks.”

You know, print — where it isn’t dying — is rapidly trying to evolve into a hybrid of two mediums. Genre publications, not having the money to fund a long evolution, need to make the jump sooner rather than later to survive. I really hope F&SF continue their experiments and manage to make it, now, before it’s too late.