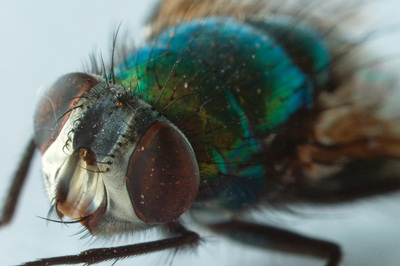 If Jeff Goldblum taught me anything with his massive brain, his obnoxiously hilting way of speaking, his MENSA membership and the massive acting awards he hangs around his skinny neck as bling, it’s this: if you have your DNA spliced with a fly, you can not only break people’s arms off when arm-wrestling, you can satisfy Geena Davis carnally all night long.

As a wimp with a forearm as easily breakable as an uncooked strand of spaghetti, this has great allure, particularly the last part. Fortunately, Jeff Goldblum was only pretending to be a fly, and he divorced Geena Davis in 1990, making her all mine if I can get my fritzing transporter devices working “correctly.” Which I can’t. So more good news!

I am an unabashed fan of David Cronenberg’s The Fly. I like it a lot more than I like the original, for all its gooeyness and gore. I like it so much, in fact, that I can’t even imagine Hollywood trying to remake it: what would be the point? Cronenberg aced it.

But then I read this Wikipedia article, saying that there was, indeed, a The Fly remake in the works. My brow contorted: that’s not good. What could they possibly bring to the table that was new?

But actually, the Wikipedia entry made the original idea seem fairly interesting: the slated director, newcomer Todd Lincoln, wanted to do it with heavy stress on the psychological metamorphosis, citing Franz Kafka’s famous short story. My heart raced: could it be? A Hollywood remake that was not merely a rote cash-in on a franchise, but was actually going to try something new? I got excited.

But of course not: apparently, the studio would have none of this brain-shrinking, Kafka commie nonsense. In protest, Lincoln left the project: now it’s in limbo. Jeez, Hollywood. All you need to do is look at Cronenberg’s 1986 version to see that the films that take unexpected chances most often become classics.