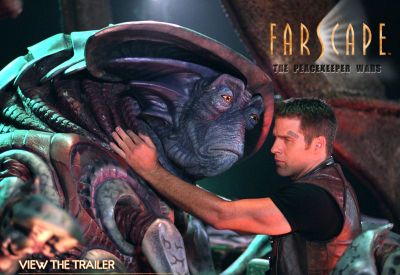 The eyes roll milky. Gibbering glossolalia tumbling from foaming lips. Tendons jut from a taut purple neck. A complete cerebral meltdown fuses circuits, miswires synapses, and allows me to smell the orgasm of my own obsessive fandom. O quae deliciae. Right at this moment, I couldn’t be more of a dork: the Sci Fi Channel has announced that they’re bringing Farscape back. In Webisode form!

I’m a fairly unabashed Farscape fanboy. Without a doubt, it’s my favorite science-fiction show. Certainly, there were some missteps near the end, and The Peacekeeper Wars miniseries was terrible, with all the hallmarks of a hypothetical fifth season crammed into a 4 hour time block. But Farscape is the only show that has ever made aliens seem alien to me. It’s deliciously weird. And I love their take on the science fiction hero archetype: a bumbling redneck in space, who perseveres through pure gumption.

As part of their new Sci Fi Pulse online initiative, The Jim Henson Company and Sci Fi will be teaming up to bring ten short episodes set in the Farscape universe to the web. Right now, there’s no mention as to whether or not it will feature the original cast (although the Wikipedia entry claims without citation that “much of the original cast and crew are expected to return”). My guess is that they’ll probably try to throw fans a cheap bone by bring Rygel or Pilot back: all they need to do is dust off the puppets and sober up the voice over artists.

Call me crazy, but what most excites me about this series of webisodes is the hope that they will drum up demand for a new Farscape series. You know, Ben Browder and Claudia Black were fine on Stargate, but Moya is where they belong.

Update: Looks like Ben Browder as John Crichton and Andrew Prowse as Pilot are confirmed, but not Claudia Black as Aeryn Sun, who has my vote as the sexiest ugly woman in all of sci-fi. Boo.