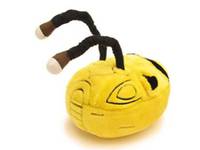 I’ve mentioned before that I’m a big Farscape fan. A bumbling Southern Yahoo in space full of flatulent aliens having weirdo sex with each other while a ghoul in a S&M suit hunts them and their living ship (which is piloted by an enormous cockroach) through the universe… what’s not to like?

Unfortunately, Farscape never really proved popular enough to inspire a lot of merchandise, or else I might have my own plastic Moya to play with in the bath tub, or my own Barbie Doll Aeryn Sun to skeevily strip and with which to play doctor.

But I really did these DRD plushies. The DRDs, if you recall, were sort of like little biomechanical Roombas. They zoomed around Moya, roughly filling the role of antibodies. They were neat. And now you can own one to cuddle.

The plushie DRDs are going for $19.95 and are now available for pre-order. My only complaint? These are just stock DRDs: they are not making a model after the eccentric, pro-American DRD 1812.

DRD Plush [Troll and Toad, via Neatorama, via Maximum Verbosity]