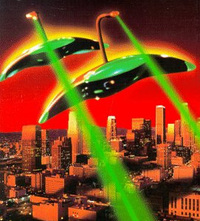 In H.G. Wells’ classic science fiction novel The War of the Worlds,  malevolent beings from Mars traverse the vacuum of space to invade Victorian England, tromping through the country side with their Tripods, scorching cities with their heat rays and plucking up British citizens to feed upon their blood. Ultimately, the Martians are defeated, not by the British but by microscopic germs, the simplest creatures of all.

Many people are not aware of this, but scarcely a year later, an unauthorized sequel to War of the Worlds was written. Authored by Garrett P. Jerviss and published in the Boston Post, the sequel — called Edison’s Conquest of Mars — posits a simple continuation to Wells’ plot: what if the Americans, instead of rolling over like those wimpy Brits, flew to Mars to kick their ass once and for all?

Having survived the initial Martian attack, the still reeling Earth sets about planning a response. The urgency of the matter is accelerated when it becomes clear from observations of Mars that the Martians are preparing a second invasion. America swiftly becomes the focus of the impending defence, and perhaps offence, for it transpires that Thomas Edison has invented both a disintegrating weapon the equal of the heat ray, but in his remarkable "electric" aircraft, has also provided a means of delivering that weapon (and retribution) to the Martians. What follows is the launch of a stupendous fleet of spacecraft toward Mars and a series of brutal engagements with the enemy. Along the way, the astronauts visit the moon (where they discover the proof of a long dead Luna civilisation) and an asteroid.

Edison’s Conquest of Mars is an unrecognized science fiction masterpiece, less for the quality of writing than the brazen impertinence of the thing.  One gets the feeling that if Wells had been American, War of the Worlds might have ended just as Edison’s Conquest does: with old Tom’s boot lodged up the Martian’s posterior. You Ess Ay! You Ess Ay!