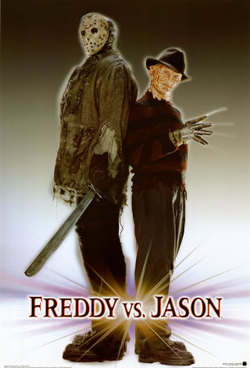 We launch our Horror Do’s and Horror Don’ts feature with a comparison of two classic posters.

Let’s say your goal is to create an image to promote a film in which two famous killers do battle.  How should you go about it?

Horror Don’t: The infamous Freddy vs. Jason "back to back" poster.

Look how comfortable they are.  Jason is like a big ol’ scratchin’ post for Freddy to snuggle up next to and purr his friendship poems to.  C’mere, big guy and lemme lean on ya’.

The famous glove is kind of lazily spread out like he’s waving to the grocer.  "Yoo hoo! Save us some chops for tonight, I’m cooking my man a meal!"  Jason’s machete is lowered like he doesn’t plan on using it.  There’s no "vs." going on here at all.

And what’s with that Touched By an Angel starburst around the title?  Yeesh!

For our Horror Do, take the leap! 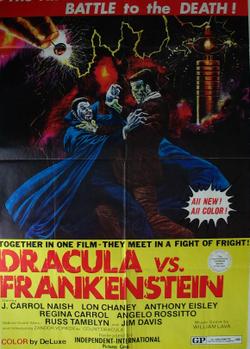 Horror Do: Frankenstein vs. Dracula!  Look at that.  Go ahead, click on and enlarge this masterpiece.  These two hate each other.  Drac’s trying to scratch and Frank’s trying to choke, and, meanwhile, terrifying crackles of savage energy make angry fry-beams all around them.

Plus, it’s emblazoned with hate-slogans like "Battle to the Death!" and exclamation points!

Plus fire! Plus All Color!

If you’re going to make a vs. movie poster, make ’em go at each other.  That’s what the kids are paying to see.  Rip his bolts out, Drac!  Muss up that widow’s peak, Frank!

Hot monster-on-monster action!  Where can I score some tix?

Any other vs. posters you want to point out as Do’ers or Dont’ers, heck, you just point ’em right out.  You can namedrop the title, and we’ll track it down, or you can mail the pic right to our monsterfestpics@gmail.com.  Commenting is a Horror Do every time.