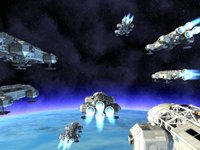 Let’s face it: popular science fiction writers have no sense of the universe’s scale.

I don’t merely mean the scientific implausibility of a quick rocket ship ride to an outer nebula. We gleefully accept a non-Einstein physical law in our science fiction, where faster than light travel is possible. So when the Enterprise takes a short hop of a trillion light years or so, we can all be cool with that.

But as a writer over at TV Tropes points out, there’s some serious problems with science fiction writer’s concept of the universe even if you assume all their starships have magical warp drives that can defy the very laws of physics themselves.

For examples, in Blakes Seven, not one member of the writer’s bullpen seemed to realize that a galaxy was larger than a solar system. Babylon Five mistakes the breadth of our galaxy at about 10,000 light years. But this is my favorite example, for the use of the clever analogy:

Probably the most spectacular example is in the first segment of the Doctor Who story “The Trial of a Timelord”, where Earth was apparently hidden by moving its entire solar system several million miles, which is the celestial equivalent of hiding from your date in an empty movie theater by leaning an inch to the left. For scale, Mercury never comes within 28 million miles of our Sun, despite being its closest planet.

Sci-Fi Writers Have No Sense of Scale [TV Tropes, via Big Dumb Object]