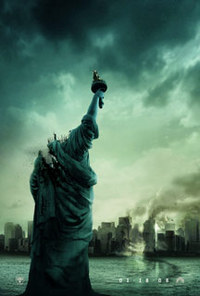 With so little known about J.J. Abrams’ upcoming 01-18-08 project (code named Cloverfield), it’s hard to tell whether covering the film is Monsterfest’s bag or mine.

Anyway, there’s still no real news on the project. All we know right now is that the trailer is shot in first-person and is about a giant monster’s attack on New York City. One of the products associated with the film, Slusho, makes vague references to the creator of Slusho finding a goo at the bottom of the sea that makes their drinks taste so good. And there’s some persistent rumoring that we may be seeing a Cthulhu Giant Monster Film, which is almost too delicious to contemplate without cerebral explosion.

The only new news we do have is J.J. Abrams has debuted the film poster at this weekend’s San Diego Comic Con. And it’s a beaut. Call me unpatriotic, but Lady Liberty with her block knocked off gets me a-quiver to see a new giant monster movie, every time.