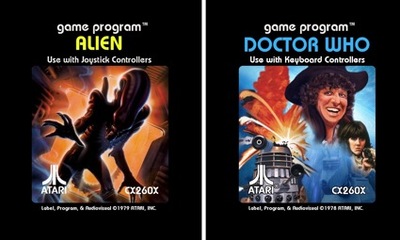 In the 80’s, video gaming was rife with terrible games based on movie licenses, and, well, nothing’s changed since then. But as an 80’s kid I can say with authority that we loved every crappy cash-in.

For example, consider the Atari 2600’s version of E.T. The Extraterrestrial. To the modern retro-gamer, it is an abomination, a strange half-breed genetically comprised of pixels and dog excrement. The game largely takes place in what famed Irish writer James Joyce described in Ulysses as “the sunken [expletive] of the world.” As E.T., your goal is to escape by extending your neck, which allows you to float out of the pit in which you’re trapped. It’s utterly stupid now, but as a kid? All I cared about was being E.T.

As such, the kid in me gets a giddy thrill when I look at these wonderful mock-ups for imaginary Atari 2600 games. Alien, King Kong, Westworld, Deathrace… I would have played them all. I would have loved them. And they all would have sucked.