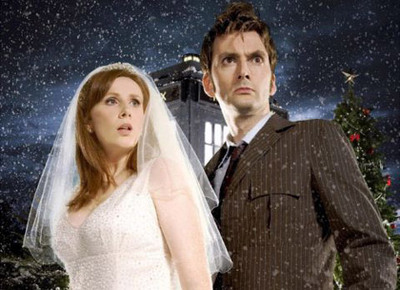 The BBC has announced the Doctor’s latest companion for the fourth season of Doctor Who: comedienne Catherine Tate, who played a character in last year’s Christmas special (at the end of which she turned down an offer by the Doctor to join him on his travels). She’ll join the cast of Season Four for the full 13 episode run.

I’m sorry to keep on obsessing about Russel T. Davies’ blunderous decisions on the new Doctor Who, but replacing Freema Agyeman with Catherine Tate just sticks in my craw.

I really liked the Christmas special Tate was in, and she was quite good in it, but her character represented a certain specific modern British office culture archetype: the shrill, obnoxious low brow secretary who spends her breaks shrilly cackling over the latest tabloids while shoving handful after handful of greasy potato crisps into her mouth.

Davies seems to like these sorts of characters: the Doctor’s companion Rose was essentially the same type, an intellectually unchallenging chav who the average Briton would not be particularly intimidated by. It’s hard to understand from an American perspective, but let’s put it this way: Rose was like the Doctor picking up a companion from the local trailer park, but I suppose this is Davies’ ‘everyman’ archetype. It’s just I’ve never been able to get my head around the question, “Why would a super-intelligent time-traveler actually want to hang out with these dimwits?”

In contrast, Freema was an intelligent, down-to-earth and assertive physician, and she only lasted 13 episodes. Perhaps the polls showed that the average BBC viewer couldn’t relate to an intelligent everyman character, I don’t know. But a quick glance at the comment section to the BBC’s announcement of Tate as the new companion is certainly hopeful: at least the average commenter seems to agree that losing Freema for a character like Tate’s is a pity.