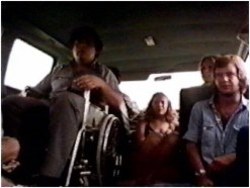 “Coincidence, if traced far enough back, becomes inevitable.” – Inscription on a Hindu temple quoted by Carl Jung (and chanced upon by me, recently, while flipping through Thomas Thompson’s book Serpentine)

Sometimes – who knows why – things just fall together right. Chance plays a huge role in the scripts of many of the best horror movies (If only this or that character hadn’t made this or that crucial mistake, everything might have turned out differently!) and it also often plays just as great a role in how those films got made.

An amazingly high percentage of my favorite horror movies are what they are because of an endless number of seemingly random coincidences. Characters I find it impossible to imagine being played by anyone else were originally supposed to be played by other – totally inappropriate – actors who only backed out or got sick at the last minute. Brilliant script moments that seem like they must have taken ages to think out properly were really just the result of some absurd practical filming detail, and wouldn’t have been there at all if happenstance had dictated otherwise.

Watching the making-of documentaries that accompany the DVD versions of Night of the Living Dead, The Texas Chainsaw Massacre, Carnival of Souls, and The Blair Witch Project (among others), my mind boggles at the seemingly haphazard way in which these films – which unfold with impossible-to-imagine-any-other-way inevitability when I watch them now – actually fell together in real life.

“Everything means something I guess,” says Sally in The Texas Chainsaw Massacre, after Franklin asks her whether she believes in the dire predictions that astrology enthusiast Pam read to the group earlier from her horoscope book. Most of my favorite low-budget horror films (that so often were never quite equaled by their makers later on, in spite of all the money and time they had to do so) suggest that Sally was right. A really great low-budget horror movie is one of the best arguments around for the idea that sometimes things just… work — and there’s no explaining why.

Or, as Pam’s astrology book puts it: “There are moments when we cannot believe that what is happening is really true. Pinch yourself and you may find out that it is.”