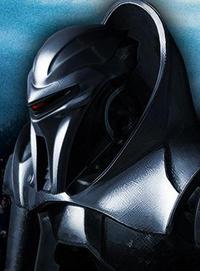 With apologies for another Battlestar Galactica themed post done so rapidly after the last one, Slice of SciFi has a great round-up of Season 4 spoilers, with one really juicy plot detail that has me salivating.

I’m the kind of guy who doesn’t have anything spoiled by spoilers: what happens is inconsequential compared to dramatic execution. But I’m in the minority on this. Make the jump only if you’re of a similar temperament.

According to Slice of SciFi, the big news in Season 4 is that the Centurion model Cylons — the old robot rust buckets that play slave to the sexy humanoid models — are not as passive and mindless as they appear. Apparently, Season 4 will see a huge revolt amongst the Cylons, as the fanatic Centurions defy the humanoid models and refuse to fire upon the Galactic Fleet, knowing that four of the final five Cylons are aboard.

I love it. A Cylon schism is just what’s been needed, and no one can say that the humanoid models haven’t been acting a tad twitchy lately. Time for the rustbuckets to get their own. Also, apparently three of the humanoid Cylons will be killed off. Another win, since most of them are obnoxious.