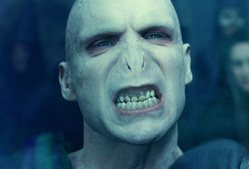 This happy fellow scored pretty well in his second week at the top of the box office charts, though not the tippy top, as that was reserved for a shameful comedy.  We bring him up to illustrate a point about the numbers we talk about each week (and because he looks cool).

One of the columns in the box office numbers we addictively refresh each Sunday evening (at Box Office Mojo, natch) is the "percent change" column.  It shows how differently a movie "scores" from the week previous.  It’s blank on opening weekend, duh!

Usually, even for blockbusters, it goes down, but sometimes word of mouth can push it up, and if it had a tiny opening, it can go way up.  Let’s see how Captivity did in week two.

Super poorly.  It made 76% less money than in its opening weekend.

Harry Potter and the Order of the Phoenix (Terrible book.  Terrible!  Decent movie, though) dropped over half of it’s audience (minus 58%), but when you open with 77 million silver sickles in week one, a big drop still nets you way over thirty mil.  Not too shabby.  That means a hot meal for all the Weasley’s.

As a side note, they say that the release of the new book probably kept theater-goers at home and not out at the movies (since they were afraid to leave the house and have the book plot spoiled by chatty theater types).  As another aside, this movie is probably better off being discussed in our sister blog over here: The Future of Classic! Despite some super-goofy character-identification inaccuracies (spotted by eagle-eye commentors), there’s some great stuff over there.

So, when all the calculators are fired up it means Captivity made something like $340 grand in its second week, so it should probably start ramping up it’s DVD advertising strategy.  Something like, "Take home the film theater-goers were too afraid to see!"

Oh!  Grizzled solider 1408 keeps plugging away.  It’s a money making machine!  A glorious hit!  I’m not sure what’s up with Joshua, which they say is legitimately good but has zero marketing behind it (so, low numbers).  Maybe they’re lying in wait and waiting for a relaunch.

I don’t know, but I do know this – I love every darn column on that box office chart.  I’m officially a stats junkie.  We should start a fantasy league!