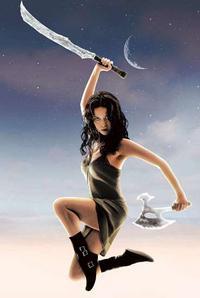 I am unabashed fan of slight, pale-skinned sylphs who look as fragile as butterflies punching bad guys through brick walls. So I love the diminuitive ballerina turned sci-fi actor Summer Glau, perhaps best known as the brainwashed, psychic bad-ass in Joss Whedon’s Serenity, but now picking up another role as a spritely ass-kicker: Cameron, the protective T-800 in the new Terminator spin-off series The Sarah Connor Chronicles.

"I didn’t think I had a chance at being cast in this role," Glau said in an interview.  "I’ve seen [Terminator 3 star] Kristanna Loken in person, and she’s so statuesque and she has that icy beauty, and I thought, ‘I don’t even want to go on this audition. I’m just going to be embarrassed. I’m going to get in the room, and I’m going to be embarrassed. But she infiltrates. And that’s what terminators are going to be now. They infiltrate. They hide. They’re not, ‘What is that superhuman person?’ That’s what we’re going to do with this series. And, I think, every week people are going to be watching the show going, ‘OK, which one is it?’"

I like this development, since I never quite understood why Skynet bothered making the Terminators look human to begin with if they all looked like Arnold Schwarzenegger in various stages of decay. I’m not really sure if I’m excited about this show or not — it seems to be taking pretty huge liberties with the established movie timeline — but Summer Glau’s worth being slightly optimistic about. She’s got spunk, that kid.