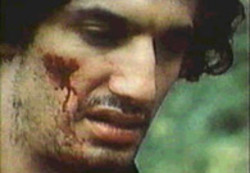 Yes, yes – I know what some of you were expecting for my “B” entry. But this is a family website, and as important as partial nudity is to a good horror movie, the fact is that partial nudity in a film that you don’t believe in is just… partial nudity.

As Marie points out in her response to my Creepy Magazine entry of yesterday, suspension of disbelief isn’t really a passive activity but an active one. The horror movies that have most effectively taken up lodging in my imagination over the years were able to do so because I showed up at the theater with my imagination in full working order and ready to be applied to the material at hand. Believing is a skill, and if you’re not ready to believe, there isn’t a horror movie in the world that will leave its mark on you.

Of course, there are plenty of horror movies – 98 percent – that don’t give all that much material for the true believer to work with. The really magic moments come when we show up at just that time (ideal age? Ten in my opinion) when our ability to understand what’s going on in the world is developed, but not so developed that we’ve lost the ability to watch a film and simply… forget that it’s a film. That, it seems to me, is the time when our imagination can really do extraordinary work – can meet a movie so head on that it stops being a movie at all and simply becomes part of our reality.

I didn’t see The Last House on the Left when it first came out back in 1972 (I was ten that year and I don’t know how I missed it), but when, fairly recently, I discovered that the original ad line for it was “It’s only a movie,” it brought back a world of memories. Back then, I had to constantly remind myself that the movies that really affected me were just that – only movies. My A-Number-One favorite horror movie of all time (Night of the Living Dead of course) is what it is for me because my first viewing of it — at the Circle Theater in Washington DC in 1971 – took place at just the perfect time for the whole film to unfold before me not as a film at all, but as a slice of reality. A slice that, for some strange reason, just happened to have been dished out onto the screen in front of me.