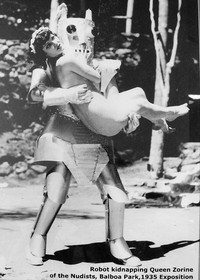 Humans love robots, and robots love humans… or at least love them as much as they can. One need look no further than the teledildonics craze to see how — as technology advances — humanity’s desire to make love to the machine merely increases.

Of course, it’s not a new phenomenon, really. All the 50’s and 60’s robot movies that featured a kicking damsel carried in the arms of a lumbering, inhuman robot palpitated with a lurid, robo-sexual edge. It even goes back as far as the 1930’s, when one of the first "robots" (really just a guy in a robot costume) spent the day frolicking at the San Diego Exposition with Zorine, Queen of the Nudists.

Over at my other blog, ectoplasmosis, I just wrote up the remarkable love story of Alpha the Robot and Queen Zorine, and I’m pointing it out here because I think sci-fi fans will get a kick out of it. If I may speak so boldly, it contains what I think is the best photograph ever taken: Alpha the Robot, smiling, with his mechanical arms wrapped around the waists of a flock of buxom nudists.

Alpha the Robot Meets Zorine, Queen of the Nudists [ectoplasmosis]