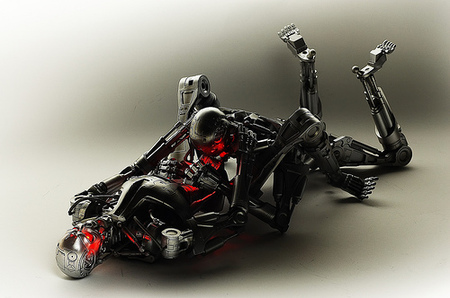 Not to betray perhaps unsettlingly perverse thoughts, but I can not be the only one out there who has been wondering more and more what sex with a Terminator is like since Summer Glau was cast as one in the upcoming Sarah Connor Chronicles television series.

Short of building my own Summar Glau model T-800 out of old sporks, spandex and toasters, I’ll probably never know. But Flickr user Cszar has put together a wonderfully perverse gallery showing what might be.

Imagine a sort of visual Kama Sutra for murderous, post-apocalyptic cyborg sex, each pose post-modernistically described in binary code, which often translates into something utterly but hysterically useless.

I’ll have to try that one with my Summer Glau bot.

PS: God bless saucy Brazilian lass Bibi, who doesn’t seem to have a very good handle on the American concept of work-safedness. In her post on the Terminator Kama Sutra, she apologizes: “Warning: the set contains naked robots in sex positions.” I imagine a vast swathe of firings across Corporate America today thanks to her. Bibi, you’re adorable. Never change.