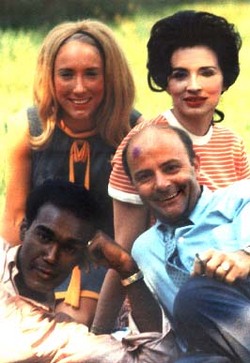 “Does it have any gore?” This was one of the first questions that my grade-school friends and I used to ask when one of us had seen a new horror film.

Despite the dictionary definition above, when we asked this question we weren’t usually thinking about blood (or dung either, for that matter), but internal organs. Livers, beating hearts…

And, most importantly, guts.

Why, exactly, did we want to see guts so much? Because guts weren’t just gross; they were, on some fundamental level, indecent. When you saw someone’s guts onscreen, you were uncovering the mechanics that lay beneath their humanity. To see all this stuff out in the open was somehow profoundly (to borrow a term from the screen ratings people) inappropriate.

As desirable a feature as they were, actual guts didn’t show up in horror movies all that often. Far and away the most memorable gut appearance from my early years as a horror-movie viewer were those that George A. Romero’s ghouls quarreled over in the post-truck-explosion feast in the original Night of the Living Dead.

Romero, of course, used real (animal) guts for this short, remarkably intense shot, and their pale, ribbony quality has a stark, documentary look to it that to my mind has never been equaled (This is the shot that, maybe more than any other in the film, still makes it hard for me to believe that, as previously discussed, Night of the Living Dead didn’t actually happen, and that convivial photos from Kyra Schon’s website like the one above aren’t simply clever digital manipulations). The very-hard-to-watch gut stuff in The Last House on the Left, meanwhile (see the extra scenes feature on the DVD), lacks the strange hyper-believability of Romero’s truck scene, but nevertheless deserves points for pure, inappropriate-for-all-ages unpleasantness.

Years later, when Tom Savini arrived with a bucketful of Technicolor viscera for the Dawn of the Dead zombies to plunge their green hands into, guts entered a new era of visibility. After Savini, the door was opened for the gut-bucket extravaganzas of Predator and the Hellraiser series.

These days, guts show up so often in horror movies that they’re almost respectable.

Almost, but not quite. No matter how jaded the movie world gets, guts will always remain basically, essentially… inappropriate.