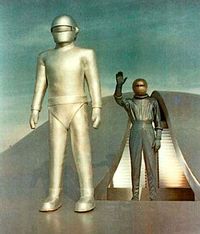 To celebrate the anniversary of Fritz Lang’s Metropolis, Time Magazine has thrown online an overview of the past 80 years in Hollywood robots.

It’s a fun read, subtly walking us through the evolution of robots in cinema, not just aesthetically, but socially and politically.

One thing that struck me as I read the article was how distrustful Hollywood has traditionally been of robots. Intuitively, I would think that it would only be towards the 70’s and 80’s that technology would advance enough that Hollywood would start picking up the paranoid social aspects and philosophical challenges of a fictional robot society.

But in actuality, a huge number of sci-fi films have robots that are looked upon with suspicion, starting with Evil Maria from Metropolis and continuing to Blade Runner’s replicants, Alien‘s cyborgs, and the murderous HAL-9000 from 2001 (we’ll leave aside the fact that the latter is not actually a robot).

It’s always interesting to be reminded that no idea is unique, that many of the thoughts and fears we have, living in a more advanced technological age, were shared by the black-and-white cavemen of the early 20th century.

80 Years of Robots in Hollywood [TIME, via Bibi]