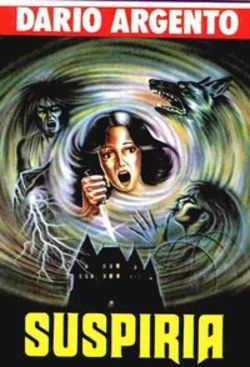 Say it isn’t so.  Another remake, this time of a time-honored classic? Forgive me if you knew this grim fact, but
First Sun is remaking the atmospheric 1977 classic by Dario Argento, “Suspiria.”
Filming begins in 2008. And I scream: There’s
no need! There’s no need to redo that
murder scene. It’s scary and perfect, as
is much of the Italian movie.

Says The Hollywood Reporter, "The original ‘Susperia’
(sic) had a unique style that we want to recapture and reinvest," First
Sun chief Luca Guadagnino said. "The concept will encompass cinema, video
games, fashion and music that will revive the original version and also include
a psychological element to the film that was not there in the original.” This makes me wanna hurl.

Wanna know why the remake could be bull?

Sure, David Allen Green will direct, and his “All The Real
Girls” is one of my favorite films of the last decade. The problem’s in the branding. If “Surpiria” is remade, it should be a tidy, frightening, little film. It shouldn’t tout
mindless fashion. Leave that to Paris Hilton.  And it shouldn’t be a
video game because ninety percent of games made from movies, horror or not,
stink from a mile away.

I’m not the only one who hates this idea, either. Today, Cinema Blend chimed in, decrying the
idea, saying, “No longer will Suspiria be that unknown title in your
friend’s DVD library that intrigues and scares you a bit. When you first watch Suspiria
it feels like a rare find – a stylistic gore horror filled with atmosphere –
that is all your own. Now, not only will the remake suck, but it will spoil the
mystic of the original film. When horror fans utter the title Suspiria,
you’ll hear a younger generation say, ‘That movie sucked,’ referring to the
remake.”   Maybe Green  will surprise me with his "Suspiria."  Me, I’m just waiting for Argento’s "The Third Mother," the third movie in the "Surpiria" trilogy, which should be out around Halloween.