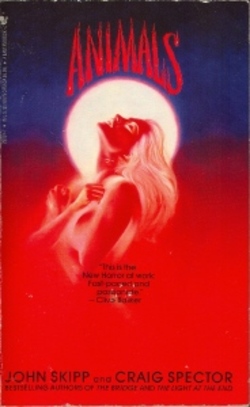 I’m a big fan of Naveen Andrews from "Lost."  So when I saw that he’s part of the cast of Animals, I got excited.  Also in the T&C Pictures cast are Mark Blucas, Nicki Aycox, Eva Amurri and Andy Comeau. Best selling horror writer Craig Spector co-wrote the landmark frightfest with John Skipp back in the day, specifically, 1993.

Says Variety, the "story centers on a blue-collar man in a dying factory town whose life is jolted after becoming involved in a romantic triangle amid a spate of uncontrolled violence."  Oh, come on, there’s a lot more than that.

Variety’s not giving a great book enough credit.  Want to know what I mean?

Just check out the first few lines of the book from a free first chapter, courtesy of Spector’s Web site:

"There was something large and wet and dead in the middle of the road.
"’Damn,’ Syd muttered, easing up on the gas, slowing rapidly to a 35 mph crawl. He just thanked God he had the road to himself, no hellbent crystal meth-crazed eighteen-wheelers on his tail. There wasn’t much reaction time, coming around the bend at highway speed. Most animals learned the hard way, and this one had been no exception."