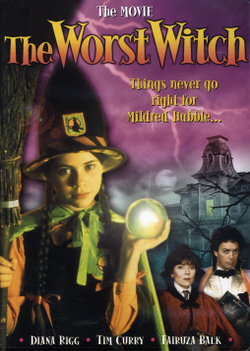 Here’s the man-pitch: Dude discovers he’s got magic powers, but he needs training, so off to witch school he goes only to discover…he’s the only boy in class!  Also, I think the rest of the students are, like, kids.

Carve me pumpkin if he doesn’t get romantically involved with the principal.

Folks are likely to make comparisons to Sky High (superhero school) or Billy Madison (old guy in kid school) Harry Potter (magic school) or The Worst Witch (magic school, but 23 years before Harry Potter and sort of unjustly forgotten), but being like something else is no reason something can’t be good or even fun.

Just ask all the zombie movies we’ve been enjoying during this recent, pleasurable, zombieglut.  Diary of the Dead is supposed to be complete, btw.

There’s that quote about there not being any new plots, just repackaging of old Greek plays, and when they’re done translating Witchestophenes into English, we’ll be able to prove it absolutely.