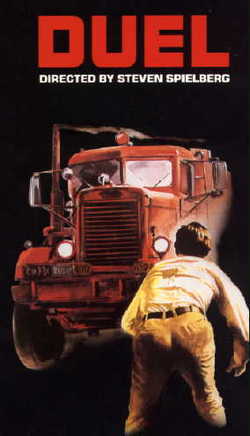 As a kid, I was blessed with extremely permissive parents. I got to see what I wanted when I wanted, and what I wanted to see, most of the time, were horror movies.

My friends, by and large, weren’t so fortunate. Their parents would cluck and fret about how scary films were unsuitable for kids, so a lot of the time they were stuck with watching whatever was available on the small screen.

But in the early 70s, the TV could be a surprisingly scary place. There was Rod Serling’s Night Gallery, for example – which, while not The Twilight Zone, still had an ability to deliver a real charge now and then.

And then there was the ABC Movie of the Week.

If you grew up in the 70s and had a TV, chances are that at least one Movie of the Week is lodged forever in your memory. For me, as for many other people around my age, the one that really stuck is Duel – Steven Spielberg’s 1971 directorial debut, starring Dennis Weaver as a wimpy businessman plagued by a giant truck that shows up out of nowhere and won’t leave him alone.

Adapted from a Richard Matheson short story, Duel took a bunch of kids in my fourth-grade class completely by surprise when we first saw it. The brilliant thing about Duel (to us then, and to me now as well) is that it’s only about… one thing. There are no side plots, and precious little character development. The capsule description my fourth-grade friends and I used to describe the film to our friends who missed it was the essence of simplicity: “There’s this guy who’s driving across the desert, and this truck starts following him.”

That’s it. For the next hour and a half, that was all the film was about. It was a fourth-grader’s dream come true. Back then, my friends and I didn’t realize why so many horror films had to have so much OTHER STUFF in them. Instead of making boring movies with a few good parts, why couldn’t people make movies with good stuff from the first minute all the way to the end?

One reason, I now understand, is that making a movie that’s 100% good stuff is a lot harder than it sounds. As it turns out, if you try to fill a movie with scary stuff from beginning to end (and aren’t Steven Spielberg), what you often get is just… a bunch of stuff happening. By the time the movie’s over, you feel like you do when you get off a carnival ride – just kind of dizzy and empty. (That’s a feeling that a lot of today’s horror films give me.)

Duel managed to be a movie about a guy in a car being chased by a truck that was also, somehow, a real story. Wimpy Dennis Weaver – who at film’s start isn’t a terribly likable guy – somehow transforms, in the course of all those endless shots of his car and that truck going across the desert, into someone you care about. His character developed just like the characters in those horror movies with boring stuff in them did. He just did so without me or my classmates noticing it.

Character development. Now that’s something any parent would agree is good for you.